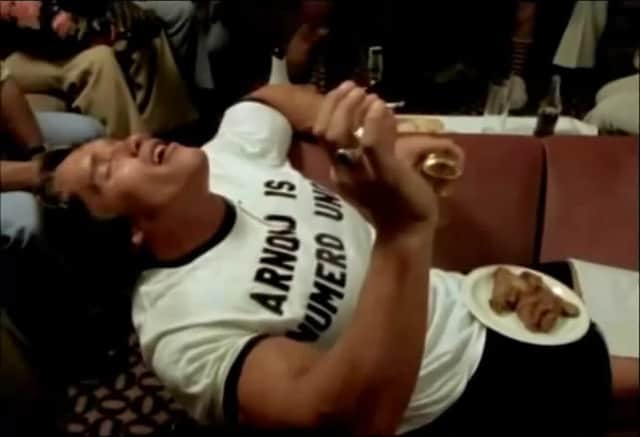 With many states and provinces legalizing the consumption of cannabis (marijuana), the rise of use among bodybuilders and casual gym-goers is increasing. There’s less social stigma around use because of research showing the positive benefits of cannabis use.

Certain extracts of the plant, such as CBD oil, helps treat chronic pain, lower chronic pain and can allow you to sleep much easier.

We all remember that scene in Pumping Iron where Arnold Schwarzenegger is smoking a joint and eating fried chicken.

Marijuana isn’t the scary substance it was made out to be, and for the casual bodybuilders out there, it’s a fantastic tool and alternative to many medications.

Even a few years ago, Michael Phelps, the Olympic swimmer, was caught using marijuana. Of all the drugs for an Olympic gold medal winner to be caught with, it was marijuana.

Who doesn’t like the feeling of melting into the couch and eating pizza anyway?

Eating aka The Munchies

One of the side effects that come to mind with marijuana is the increase in appetite. For those that call themselves “hard gainers”, meaning people who struggle to eat in a calorie surplus, marijuana goes hand in hand with bodybuilding.

You need to be in a calorie surplus to allow your body to grow and build muscle. THC, the psychoactive compound in cannabis that makes you feel “high”, triggers certain receptors in your brain that trick it into thinking you’re hungry.

The repercussion of increased appetite is how easy it is to overheat. On an occasional basis, overeating doesn’t result in much, fat gain.

Your body needs calories for muscle growth and to repair tissue, right? Well if you’re overeating by a large amount on a regular basis and not burning all those extra calories, you get fat.

A solution used by many to help with the munchies is to stick to low-calorie foods with lots of volume such as celery, carrots and popcorn.

Artemus Dolgin, a popular Russian bodybuilder, speaks to his marijuana use and claims it’s helped him with his success. Artemus uses high protein foods to combat the munchies, and that’s probably the most productive way to eat as a stoner bodybuilder.

Protein, generally speaking, is more satisfying and more filling than over macronutrients (apart from fats, but that’s another story). Have you ever eaten an entire box of Kraft Dinner and you’re still hungry after?

It’s entirely carbs that get converted to sugar, making you feel sluggish right after a meal.

Thanks to the power of science, there are lots of protein-rich snack foods available now. Check it out on Amazon:

Controlling your eating, whether it be in fitness or life in general, is a learned skill. The best and most effective diet is PTFD diet: Put The Fork Down.

NuLeaf Naturals, based in Colorado, offers wellness products derived from specially bred therapeutic hemp (Cannabis Sativa) plants grown on licensed farms in Colorado. NuLeaf Naturals high-quality CBD oils are the ideal use for the bodybuilder looking to try CBD oil for medicinal purposes. Legal in over 50 states and 40 countries, medicinal cannabis use is on the rise.

The most popular consumption of cannabis is through combustion, meaning smoking marijuana. Inhaling smoke leads to many negative side effects which is why cannabis extracts, such as oils and distillates are growing in popularity. You no longer have to smoke marijuana but can now take a pill instead.

One of the most popular forms is CBD oil. You can place it under your tongue, or place it in food. Since CBD is the non-psychoactive component of Cannabis, it won’t get you “high” so day-to-day use of CBD oils is common. Anti-anxiety is among the most common use of CBD oil, second to sleep quality.

What about cannabis and testosterone levels?

Now I’d like to say “NO! Cannabis does not affect testosterone” BUT the jury is out. There are conflicting studies saying that it does lower testosterone while others say there is no decrease whatsoever. This study “suggests a minimum of 24 hours are required for testosterone to return to pre-smoking levels” but does not come to a concrete answer. Another study suggests that there is no correlation, but keep in mind for most of these studies cannabis is being smoked (combusted) which again, results in a plethora of health issues in itself.

Some studies show positive testosterone boosting qualities of zinc and magnesium. Zinc, magnesium and vitamin B6 is the basis of ZMA, a supplement that you can get at any grocery store that boosts your recovery.

Whatever your use of marijuana is, stay within the realm of control and take notice if it’s becoming an issue. If you rely on it too much for something like sleep, you won’t be able to fall asleep as easily naturally. Don’t think of marijuana as a miracle drug, even if it comes off that way, but a supplement to your current diet and training.

How To Make Your Own Pre-Workout [Best DIY Recipe]